The Tokyo-based photographer Eriko Kaniwa captures nature and turns it into images of the uncanny and not-quite-real. In her work, objects like birds, flowers and ancient shrines feel like discoveries from an alien planet. Doubly so her more abstract work which present lush renditions of metalizing molecules and other witnesses of the “Unknown Intelligence of Nature.” To me, her work brings to mind the infinitely malleability of H.R. Giger combined with a sense of purpose that elevates her visual effect beyond the accomplishment of the strange and into the ethereal possibilities of human existence. “I’m not saying we should go back to some lost past,” she says, “but rather that I want to accept the present reality and ask what is essential for living on this earth.”

Most recently, her “Nature's Spirit” series was given an honorable mention at the Prix de la Photographie, Paris in 2018 and I had the chance to talk to her about her process, her influences and how her work arrives at its unique form. Conversation condensed for clarity.

NY-ARTNEWS: You’ve called photography “an action in the fourth dimension.” When did you first become aware of that world?

EK: When I was young, I once saw a mysterious globe of light hanging by a luminous thread from a pine tree in the garden. I can only describe the feeling it gave me as one of sanctity. I don’t like to go too far in deifying the unknown, but even today it’s hard for me to forget that formative experience of seeing something—not so much with my eyes, as perceiving it through my eyes with my inner senses.

In the past when I worked as a portrait photographer, I keenly felt the need to connect with the inner side of my subjects so that I could capture their best expression in a short period of time. In the process of snapping photos as I talked with them and carefully observed them, there would be moments when their inner light would shine through and that was something that could be shared only through the relationship between them as subjects and me as the photographer. Through these kinds of experiences, I came to see photography as a means by which light manifests itself through the media of humans and cameras.

There has been a concept in Japan since ancient times of expressing “gaps” or “ma” [間], invisible things or “negative space” or periods of time that exist in the folds between visible space. I have probably been influenced by this sensory concept as well. With photography, it’s possible to achieve expression in the fourth dimension, by which I mean borrowing the power of technology to take a bird’s eye view on time by either capturing images in a fraction of a second, or using long exposure. It also feels connected to the Buddhist concept that “form is itself emptiness and emptiness is itself form,” which explains the embodiment of substance and spirit, and that’s so fascinating to me. 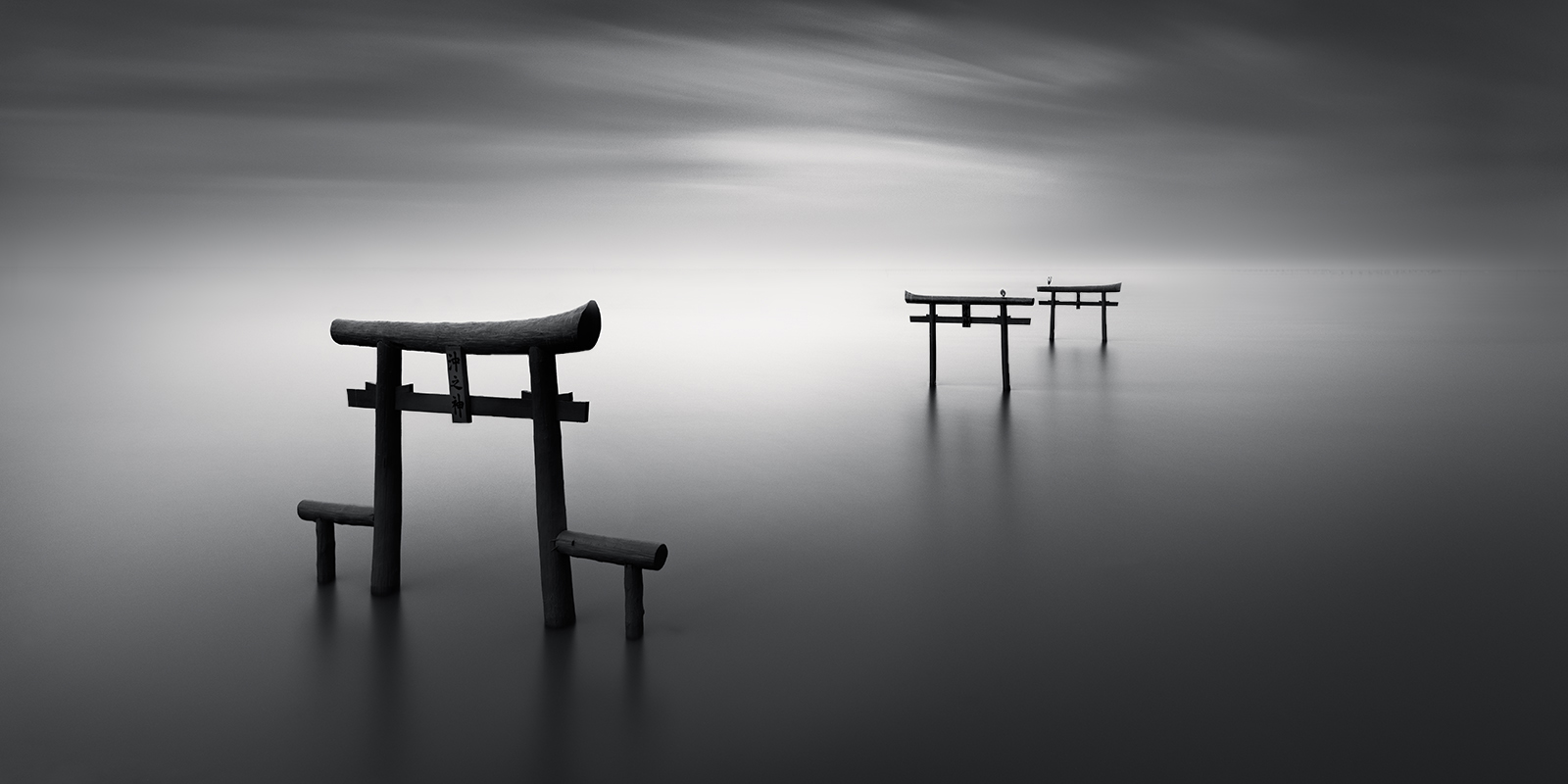 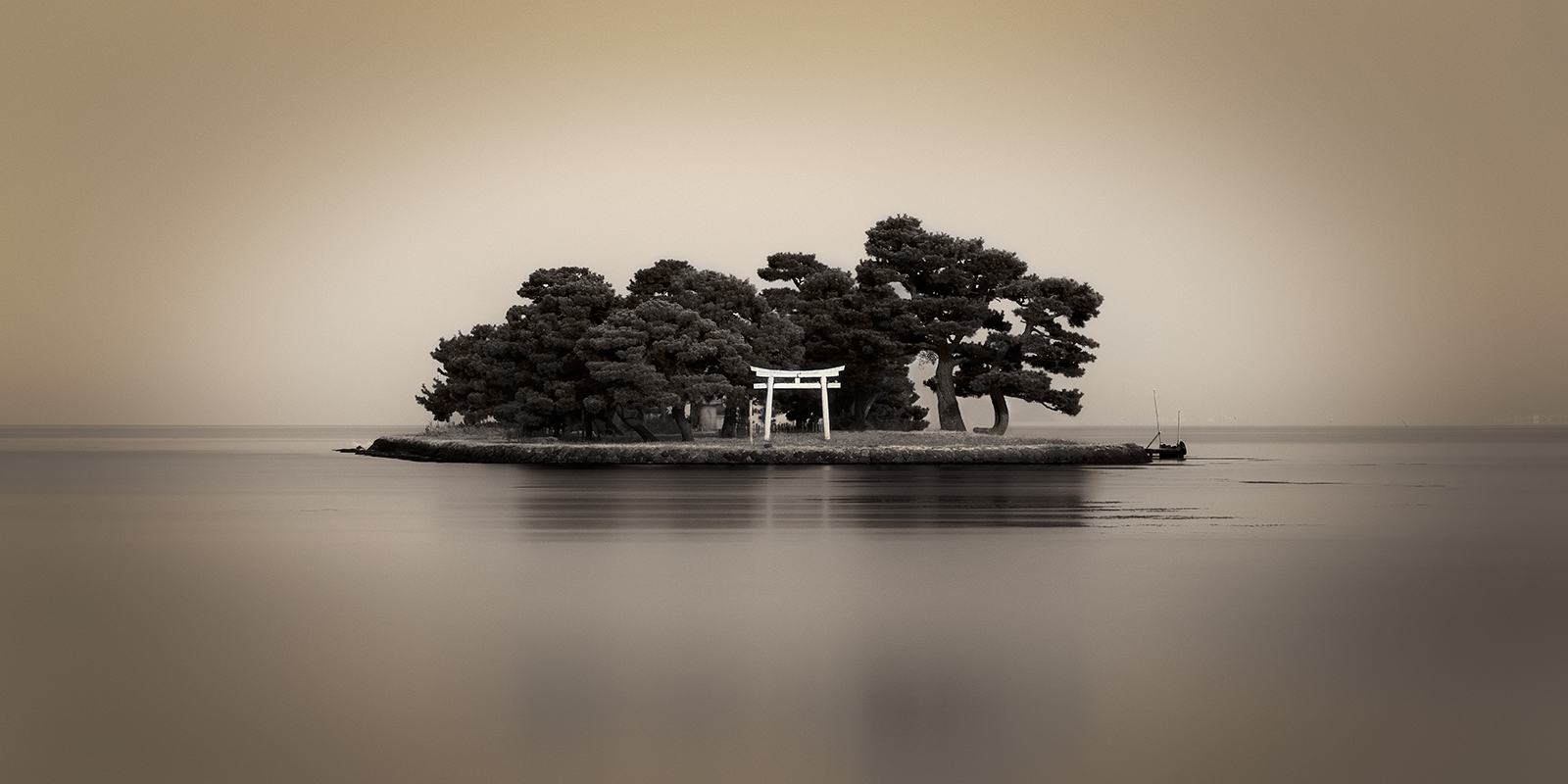 NY-ARTNEWS: One of your series is titled “Spiritual Landscapes.” What makes a landscape spiritual?

EK: What landscapes don’t have spirituality? Since ancient times, Japan has had a religious value system based on the yaoyorozu no kami or “myriad gods,” which differs fundamentally from monotheistic religions. The Japanese practice, or used to practice, a form of nature worship in which we accord reverence and awe to all material phenomena that surround us. My “Floating Sanctuary” and “Wedded Rocks” series of long-exposure photographs depict structures that symbolize this Japanese religious value system—although I hesitate to call the Wedded Rocks “structures.”

They serve as boundaries between the sacred and profane worlds as well as doors that welcome the great workings of nature, and at the same time they are also mechanisms for synchronizing our spirits with topos, or physical place. These types of natural landscapes, first of all, remind us of the connections between humans and nature that are on the verge of being lost in Japan, and prevent us from forgetting that we, too, are part of the workings of nature. We can think of them as enshrined landscapes that spur us to revisit these truths within ourselves. I call these the spiritual landscapes of Japan.

NY-ARTNEWS: What were some of your formal influences as a photographer?

EK: I have never been formally trained in art. Perhaps due to the influence of childhood experiences, I have been interested since adolescence in things like Carl Jung’s thoughts on the collective unconscious, the relationship between the workings of nature and religious beliefs, and theories that transformed our ways of perceiving the world and I read widely about these topics. As an extension of that I was profoundly drawn to the symbolist paintings of artists like Gustave Moreau and Odilon Redon, the iconic worlds of heaven and hell depicted by Hieronymus Bosch, and the Surrealist movement led by André Breton and Max Ernst. And the works of artists like Leonor Fini and Remedios Varo, who turn the social structures that we take for granted on their head along with our mechanisms for building those structures, our ideas about life and death, our aesthetic sense and attempt to attain new horizons of consciousness.

In terms of photography, I have been influenced by the work of people like Joel Peter Witkin and Hans Bellmer, who seek to connect imagery and ideas about life and death that are buried in the depths of the dark side of human consciousness and connect or integrate them with everyday life. And by the eroticism and sense of life in the intense body of work by Robert Mapplethorpe. Later, I was very strongly influenced by the “Theaters” and “Lightening Fields” series by Hiroshi Sugimoto, the Waterfall series by the Nihonga painter Hiroshi Senju, and other works that span a wide range of themes but are characterized by Japanese aesthetics and beautiful, well-balanced technical skills.

NY-ARTNEWS: What current artists have been inspiring you lately?

EK: The film director Denis Villeneuve. Enemy, Arrival, and Blade Runner 2049 all address profound philosophical themes connected to issues of technology and society. I have incredible respect for the breadth and depth of the sensibility he expresses without turning away from the human subconscious or social problems. I’m struck not only by the visual beauty of the work, but also by the ambiance and ephemeral atmosphere and expansiveness of these meditative spaces he creates.

NY-ARTNEWS: Many of your photographs are of natural object or ancient man-made locations but not people. Is that a conscious decision?

EK: Not particularly, but I do believe that the universe and the workings of nature exist even in the gravel by the side of the road, and I am very interested in how I can raise that gravel visually to the level of fine art, and whether I can turn it into something that touches people’s hearts.

NY-ARTNEWS: What attracts you to a subject?

EK: I’m interested in the ways that the essence of various phenomena reveals itself—in things that evoke views of nature, life, and death that have been passed down in Japan since ancient times, in the true nature of what we call “beauty” hidden within tradition, and in natural forms and textures that don’t really require quantitative concepts like big and small, or time, or more and less. Sometimes, I use these as the raw materials to create new subjects that are like visions or the products of imagination.

NY-ARTNEWS: What kinds of myths appeal to you?

EK: When I talk about myth, I am referring to Japanese myths and folklore. When we accept the idea that these myths were compiled by the rulers of the day to demonstrate their own power, stories about a country’s origins become even more interesting as expressions of the unique natural phenomena and people of that place. For instance, I think that stories in which characters are told “you must never look when I am doing such and such,” or “you must never look back when returning to the mortal world” are metaphors expressing wisdom about human limits and the dangers of trying to know too much about the mysteries of the world, and I think they ring alarm bells about the current direction of scientific and technological advances.

NY-ARTNEWS: Are you worried of the current direction of scientific and technological advances?

EK: It’s clear that capitalist economies and societies are showing their physical limits and are having a tremendous impact on all forms of life on Earth. We tend to view this as an irreversible trend and to give up on trying to change it. But when we think about things not in terms of an axis of time moving from past to present to future, but rather in terms of the essence of things, all sorts of natural phenomena begin to look different, and we realize that these are transformations in the manifestation of energy.

The shape of the cloud that I saw when I looked to the sky a moment ago may be such an ephemeral part of this planet that I will never see it again as long as I live, but clouds themselves will never disappear. Precisely because the life of all beings, including ourselves, is equally ephemeral, it is important to think about what to consider and express in this moment. At the very least, I want to continue making art from that perspective. I’m not saying we should go back to some lost past, but rather that I want to accept the present reality and ask what is essential for living on this earth. I hope that will become one part of our wisdom. I want to follow where my sincerity and inspiration lead me, and continue to steadily pursue the creation of art.

Who's Behind The NY ART News

In Greek mythology, Clio or Kleio, is the muse of history.